A vibrant Christmas celebration was conducted in All Saints’ College on 19th of December, 2019, bringing in all the festive cheer. The celebrations started at 9:45 am, with the inauguration of the Annual Ice-Cream Fest, ‘Likalitious 2K19’. The fest was inaugurated by the Manager, Mother Mary Frances, by purchasing the first ice-cream from the volunteers. The day was bounteous with fun-filled programs and activities like Carol singing competition, Crib making competition, Paper dance and Treasure Hunt. Carol singing and Paper dancing were held inside the auditorium while Treasure hunt and Crib making were allotted outdoor venues. Other games such as ‘Dear Santa’ were also organized. The college premises were lavishly decorated, thanks to the effort of both staff and students. These activities were followed by an official function that began with a prayer song.  As her tenure as Principal of the college comes to an end on 31st of December, Dr. Caroline Beena Mendez addressed the gathering with the promise that the college is being passed on to able hands.

A note of thanks was rendered by Ms. Nanditha B Krishnan, General Representative of the second year, on behalf of all the staff and students. The winners of the competitions received their prizes from the Principal. The music club of the college, ‘Harmony’, presented carols.

The teaching staff also joined in the celebrations by singing carols with the enthused audience singing along with them.

A play was staged to ring in Christmas vibes under the guidance of Sr. Carvalho Faustina Cecilia.

The programme concluded with the arrival of Santa Claus, who distributed sweets among the audience. 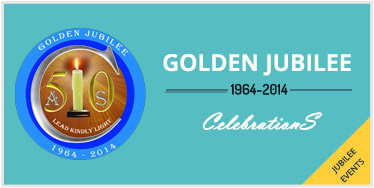